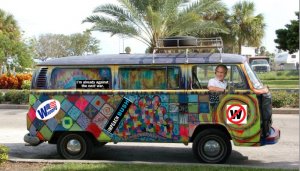 Today marks the 100th Day that George W. Bush has not been president. A grateful nation wants to commemorate this auspicious day and every day forward that the Bush Regime is history. On this momentous occasion let us mark the accomplishments our former slacker leader has achieved since he is no longer bleeding leading us.
(click on image to enlarge)