Maybe it’s just a coincidental diversion from the 24/7 Trump all news all day Trump-this-and-Trump-tweeted-that but dolls are suddenly in the news, fake or not. Dolls, as in American Girl Dolls. Or an American Girl “Boy” doll. As described by Mattel, this 18″ (tall) boy doll, with an algorithmically correct name of Logan Everett, is dressed in hipster t-shirt and dark washed jeans and plays drums in his friend Tenny Grant’s band. The guess is that Tenny (Tennyson?) is still taking guitar lessons in the Mattel incubation 3-D printing  laboratory.
Since we live in an age when everything has political ramifications even dolls are now politicized and this new American Girl boy doll is shearing our fraying cultural fabric into even smaller shreds and threads.  Political and cultural conservatives are as outraged as are some liberal feminist factions condemning this incursion of plastic male chromosomes into the girly no-boys-allowed worlds of doll collection and play. Other self-proclaimed enlightened parents see Little Logan as a teachable lesson in diversity while others reportedly hold that little boys like to play with dolls too.
And this brings us to another issue. Is our new American Girl Boy Logan a stealth “gateway doll” priming the pump not just for diversity but for homosexuality, transgenderization and even pedophilia?  (Will Mattel see large orders of Lil’ Logan from The Vatican? Just kidding, Francis!) What are we to do? One answer could be to embrace the newly announced Jazz Jennings Transgender Doll announced recently by a New York doll company, according to the New York Times.

Based on the real 16 year-old Jazz Jennings, who at age 6 appeared on national television to discuss his transcendent journey from boy to girl, does the new Jazz Transgender doll solve this doll conundrum or add to the confusion and division? Some big questions arise. Foreskinmost – is Jazz T anatomically authentic? Or chromosomally correct? Is it only a matter of time before America’s boy doll Longan’s friend Tenny becomes “Tranny?”
As Baby Boomers transition from boomers to doomers maybe it’s time for kids to play with old people dolls like the kind one finds on Pinterest. This will prepare them for their career fate of elder parent care. How about American Old Person Doll Elmer Hopkins, age 92, and his nursing home next door resident Florence Flowers, age 90. Elmer and Florence wear cotton jogging pants, pajamas and sweat shirts that say Have a Great Grampy/Grammy Day. The Elmer and Florence dolls comes with their own walkers with removable little tennis balls on the feet. But perhaps the best dolls for these troubled times might be Russian Matryoshka or babushka nesting dolls, one
inside the other, each one unveiling more and more of the rotten truth of Trump’s complicity with the Rooskies to steal the Presidential election. And I wanted to keep this subject just about dolls. Thanks, Trump. 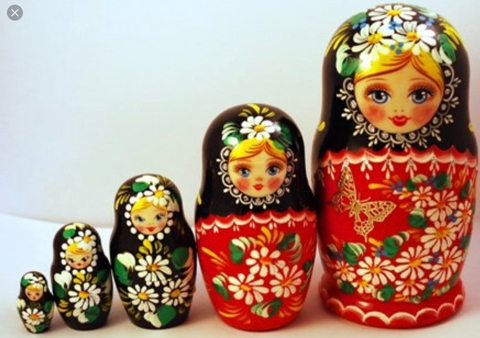