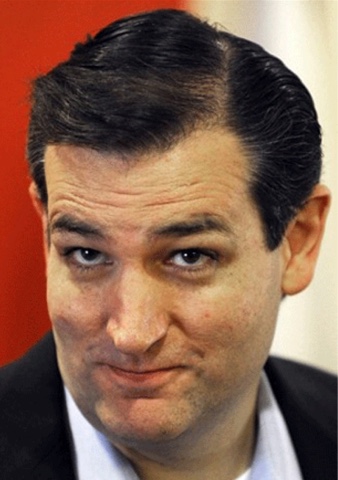 That women get judged on their looks and appearance more than men is a given. It’s not right to judge a person by one’s visceral reaction to appearance, demeanor and other subjectives such as voice, height, hair style, eyes and the  overall qualities that comprise what we generally consider as “looks.” I know it’s not right. Yet why do I have such a strong visceral (from “viscera”….intestines, bowels, gut; from instinct rather than intellect) negative reaction to Ted Cruz, the smarmy (totally subjective, sorry) candidate for the republican presidential nomination? His high-pitched voice perfects onomatopoeically the whine of a dentist drill with all its associated shudder and vagus-nerve inducing nausea and clammy coldness. His hunched shoulders and thrusting head produces a badgering mien threatening to cower his audience into submission. Behind a podium, he leans his skewed mis-aligned angley face downward doggedly in sarcastic towering arrogance belying his 5ft-7inch stature and with deft yet programmed hands gestures robotically in sync with sad disapproving basset hound-of-hell eyes casting damnation on all who fail to heed his admonitions. This is Ted Cruz. The slick pompadour hair harkens to a past era, a carnival barker, a Fuller Brush salesman? Under stage lights his skin reflects a pallid smeary corpse-like patina, waxen.

The curled upper lip snarls and scolds disdainfully giving purchase to a poisonous pedantic piety from a Puritan pursed mouth proclaiming peevish punishment for all who disagree.
And yet I question my intense reactions to Mr. Cruz’s physicalities. It’s not that he has, according to current standards of what constitutes beauty/attractiveness, an “ugly” countenance. But there is some intangible aggregate of his overall appearance and how he wears and utilizes these physical attributes that sends up warning signs. Empty this sack full of pain and fill it with the heart and soul of Bernie Sanders. How would I react?  Bernie has a rough and worn appearance that may cause cringing, weeping and gnashing of teeth in those who disagree with him. But it seems that beyond Cruz’s stated policies, his proclaimed beliefs, his political philosophy there lies something uncomfortable, dark and on the threshold of….evil? I know it’s not right to judge him on how he looks. But could this visage be a mirror of his soul or spirit, his very essence and intended purpose on earth? I don’t know. But what I do know is this person scares me. To the point where I have to admit that given a choice between Mr. Cruz and Donald Trump (please gods, spare us from such a choice) I would have to choose Trump. Cruz, I admit, is smart, very smart and probably the best diabolical debater among all candidates. He has a plan, and is executing it demonically. Be afraid. Very afraid, something tells me.