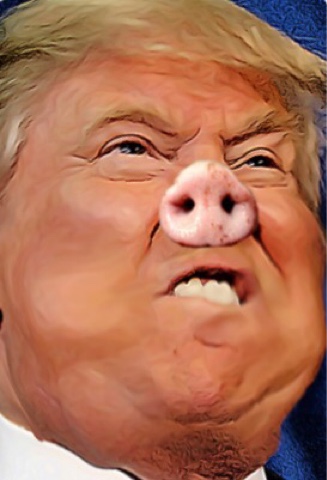 He’s called Mexicans rapists, drug addicts and criminals, promises to build a “big, beautiful wall” around America to keep out undocumented migrants, blamed tough media questions on a reporter’s monthly period. He calls people he disagrees with fat, idiot, stupid, morons. Claims President Obama’s birth certificate is false. Says Ariana Huffington and Carly Fiorino are ugly. Said you can’t beat ISIS if you sweat too much and that if Hillary can’t satisfy her husband how is she going to satisfy America. He says global warming is a hoax. “Black guys counting my money! I hate it. The only kind of people I want counting my money are short guys that wear yarmulkes every day.”  “I have a great relationship with the blacks.” “I’ve said if Ivanka weren’t my daughter, perhaps I’d be dating her.” “You know, it doesn’t really matter what [the media] write as long as you’ve got a young and beautiful piece of ass.” “Often times when I was sleeping with one of the top women in the world, I would say to myself, thinking about me as a boy from Queens, “Can you believe what I am getting?” “Heidi Klum (supermodel). Sadly, she’s no longer a 10.” Oh, yes…Trump also says he absolutely saw TV footage of 1000s of Muslims in New Jersey celebrating on 9-11. And yep, recently Trump mocked a disabled New York Times reporter by imitating his body movements. Whew….I’m out of breath and energy digging up these Trumprageous comments. Let’s go to future tape.

So. What’s left for Trump to say? Who and what hasn’t he railed against and insulted. Here are a few insults waiting in the hopper, predictions of what he still might say that will inexplicably increase his poll ratings.
On The Pope. “Yeah, Francis, Frankie, he’s a fat old geezer. A real loser. Just look at that belly. Not even Rosie O’Donnell would get on her knees for him.”
Native Americans: “These so-called noble savages don’t even know how to run a casino like me…give’em a few shots of liquor and they’ll end up scalping themselves instead of their customers.”
Automobiles: “Basically just pieces of junk.. I don’t know why people buy them…the best mode of transportation is a limo and a private jet. And I’ve got the best private limos and jets at my disposal.”
The late Mother Theresa: “She was an ugly skinny old hag. So over-rated, that one.. No one tends to the poor better than me..believe me…when I’m President the poor will be tended too so much they’ll get tired of it!! They’ll say “Stop it Mr. Trump, no more tending.. !”
Refrigerators: what’s this all about anyway? Keeping food cold? I like my food hot and served to me in one of my 5-Star restaurants..I’ve got Mexicans, Filipinos, Orientals to cook it..who needs a refrigerator..or a stove! Losers and morons, that’s who! “
Smart phones: Believe me.. the iPhone and those Korean phonies are total losers…for the life of me I can’t figure out why people buy these things..I’ve got the best phone, a MeTrump phone..solid gold with diamond keys. Made exclusively for me by the best people.”
Milk: Never drink it! Never drink anything that comes out of a cow’s tit. Can you imagine? This cow’s laying around in its own dung eating weeds and stuff and this is what makes milk? I drink only the best milk…beautiful young virgin milk from world class virgins. And I know virgins.”
Apple Pie: who would eat that crap? I’ll tell you! Losers! Morons! I only eat the top shelf pie…Trumpie: made with the best stuff you ever tasted.. baked by the best people who know how to bake the best.. And believe me I know the best!
Motherhood: you ever hear me talk about my mother? No! Motherhood is for idiots! Who needs’em! That’s all I’m gonna say on that subject… don’t get me started.
Navy Seals: what’s up with that name anyway? A seal? Who wants to be a seal, flapping and honking on a chunk of ice all day long? These guys are so over-rated…all that training they need. So they shot Bin Laden? I like guys who didn’t shoot bin Laden…who maybe…you know…just bombs the crap outta the Osamas. I know how to bomb people. No one bombs better than me, trust me!”
Yes, trust him sooner or later to say all the above, and worse. And rise in the polls.
God Bless & Save America.
Read more like this and not like this at my blog: http://www.praajek.com