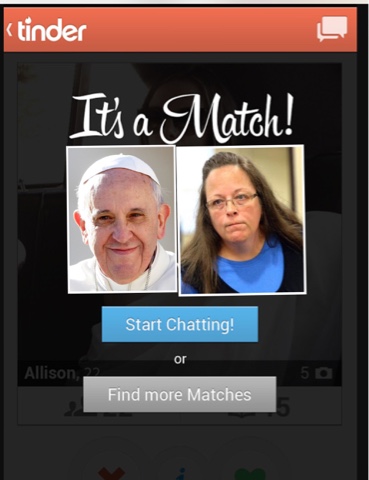 Will Pope Francis abdicate the Papal Throne to be with Kim Davis? Rumors, just rumors say Vatican spokespriests in response to rumored rumors that the Pope has succumbed to the fleshy fruits of Morehead KY county clerk and sex goddess Kim Davis.

“Although I’m the Pope I’m still a man…who among men could resist the siren song of this Kim Davis?” Pope Francis supposedly whispered to an aide in an overheard unsubstantiated conversation on the Papal flight back to Rome.
If true, this would be Mrs. Davis’ first seduction of a Roman Catholic Pope. “I’ve had lots of pastors, reverends and a deacon or two,” Mrs. Davis supposedly said, “but Lord Almighty I never imagined a real live Pope…hee haw and whoopie doo.”
Mrs. Davis reportedly told reporters she and Francis were brought together by Jesus and Tinder. “I was just doing some plain old Tindering in the fields of the Lord and wouldn’t you know it up popped the Pope so I quick-as-a-lump-of-lard-on-a-pile-of-grits Swiped Right…and heavens to holy matrimony next thang I see on my Google Android phone is a match made in heaven…one woman and one Pope.. just how Jesus wanted it”, she might have added.
http://www.praajek.com

1 thought on “One woman and one Pope.. just how Jesus wanted it..”