Looks like our puppet thug in Iraq, Nuri al-Maliki is backing off his threat to keep his job by military force after being replaced by a newly-appointed and US-blessed thug. Of course all it took was a little persuasion in the form of our strongest and most reliable tool and weapon of international diplomacy and nation building: Bags O’Cash. 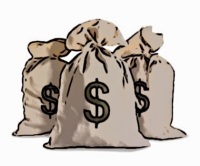 This is just a wild guess at this point but we can assuredly look forward to reports similar to the ones last year that exposed the CIA’s bribes to our puppet thug Afghan President Hamid Karzai who eagerly awaited each month for his bags, suitcases and backpacks of US cash totaling by some estimates tens of millions of dollars. Perhaps this is the most cost-effective method of getting countries to do what we want. Considering that the Afghanistan and Iraqi wars have cost the US taxpayers between 4-6 trillion dollars, bribing despots, thugs and dictators to behave as we wish costs less than the money, blood and havoc we wreak upon our nation and the victim nations we choose to invade. Let’s take a nice chunk of that $640 billion we now spend on our military and create a truely cost-effective weapon that needs no testing, no competing for major manufacturing contracts, a stealthy weapon that flies under the radar, penetrates bunkers like a farm boy in a field of ripe melons, an infrared guided surface-to-wallet missile that strikes and satisfies the most despotic heart of greed: The Pentagon’s Bag O’ Cash. Oh, and delivered by drones.