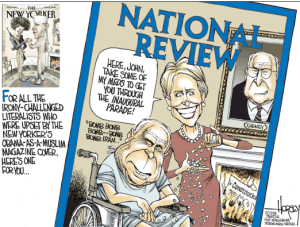 Although someone stole my most recent New Yorker…or else the postoffice lady looked at the cover and decided it was not fit for delivery, the cover cartoon, so widely shown across the world, was funny. And not. As a Barack supporter, I know he’s got to take some knocks and be subjected fairly to satire. Fairly. Not so sure about this one…which attempts to satirize the misconceptions, rumors, blatant lies and innuendoes swirling about the Obamas. As Bill Maher said about it, “If you can’t do irony on the cover of The New Yorker, where can you do it?” Problem is, Bill, this is not irony. According the New Yorker publisher David Remnick, the cartoon cover attempted to depict what right-wingers think about the Obamas. Not sure it succeeds in this. Even a New Yorker fan such as Praajek thought this one plays it in reverse. Instead of satire or irony, it fans the fires of the very lies people are spreading about the Obamas. Verdict: New Yorker…you blew it. Now, where is my copy that I paid for?