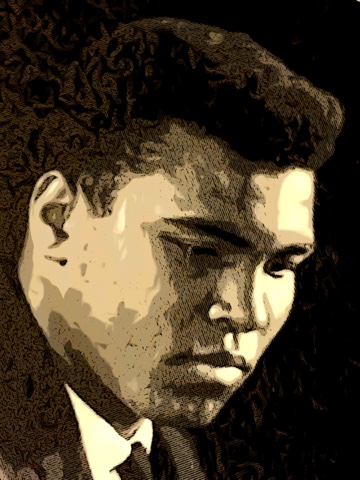 He was my first hero. As a high school kid, I listened on radio, like in the old days, (hell, it was the old days!) to his first fight for the championship in 1964. Why I was in his corner then I don’t know. Something about his story I’d heard and read about, his name Cassius Marcellus Clay, his fearless facing of the older and stronger Sonny, “The Bear” Liston.  I was already a boxing fan, somehow intrigued and fascinated by the Floyd Patterson and  Ingemar Johansson fights several years earlier. Boxing wasn’t a team sport. I grew up without a team sport affiliation, either high school or professional. I didn’t play sports; the only guy in my tiny high school who didn’t play on the only two sports offered: basketball and football. I was anti-sports and my refusal (some might say inability) to play gave me that much-needed, although negative, identity sought in high school. But in boxing I saw the little guy, the outsider, the bullied facing the bully. Muhammad Ali filled that role for me. Disdained by the experts and pilloried by the media, Ali drew strength from his opponents, weakening them. His refusal to serve in an unjust war — the bully military vs the bullied cannon-fodder conscripts –his embrace of a culture that opposed the rules of white America, his non-conformity…unwilling to play the sportsmanship game angered the social, political and sports establishment. Ali, a General in the cultural wars of the Sixties, like Martin Luther King, made America face its sins of racism and its weakness of inequality. Ali practiced and lived a life embedded in Islam, the kinder and wiser version of Islam that contradicts the hate-filled jihadi-swamp that the world now fears. At the height of his boxing career, banned from the sport, he took to the college lecture circuit professing civil disobedience, conscientious objection, condemning the Vietnam War, racism, and social injustice. He spoke at Ohio University while I was a student and I met him after his speech. His handshake swallowed my hand and his eyes reflected starlight. He was literally bigger than life. He created a large part of what the Sixties became. And in retiring from the ring Ali continued to live his life of courage, grace, wit and humor that highlighted his youth and defined his greatness. When he quit boxing he ended the sport. I never watched another match. Boxing was counted out and never rose off  the canvas, they one that Ali used to paint his masterpieces. He once wrote the world’s shortest poem.  “Me? Whee!!” Ali…my first & last hero. (Not for worry Dad…you’re in a singularly reserved category).